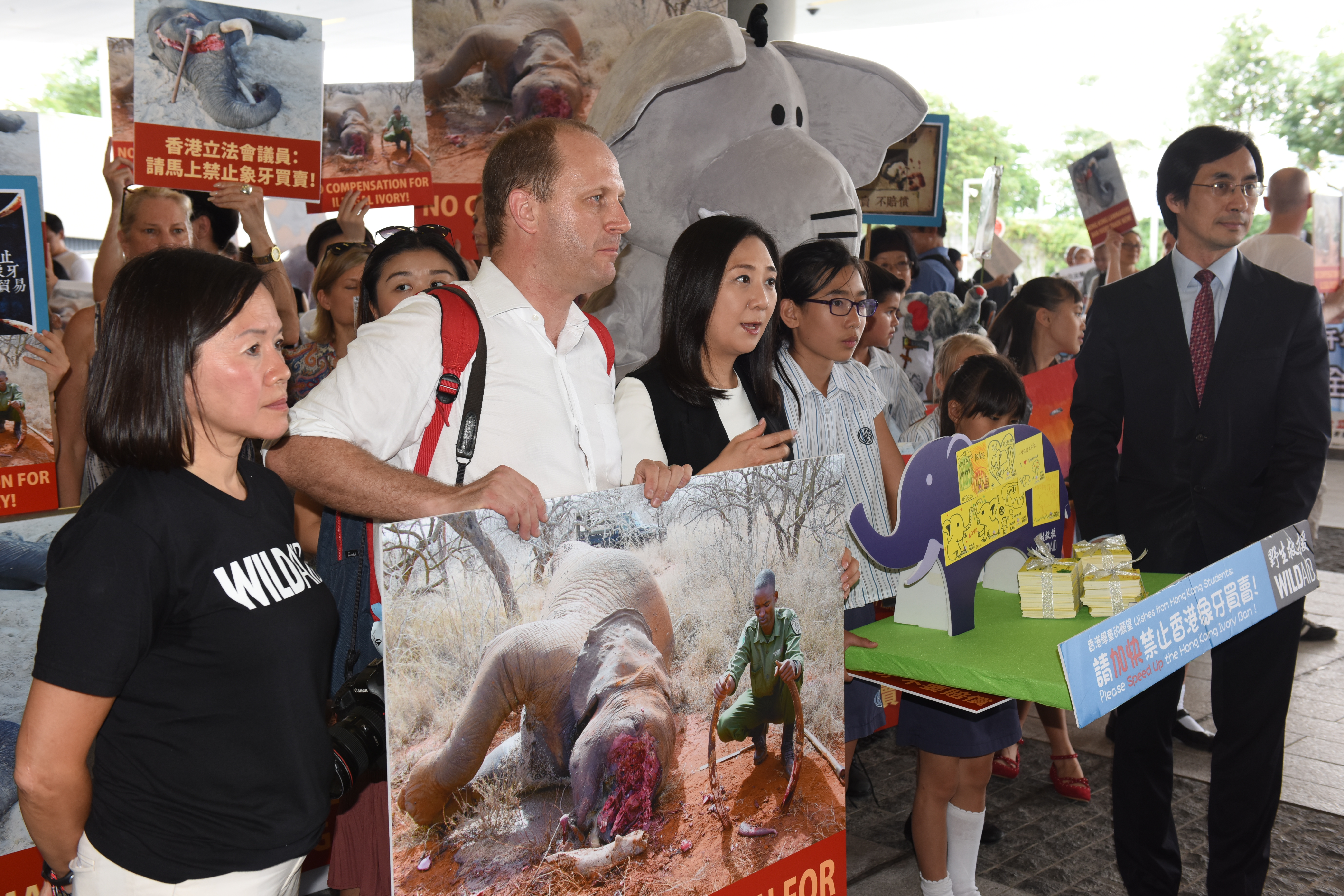 The process is now underway to eliminate the ivory trade in Hong Kong.  On June 6th, the Legislative Council (LegCo) gathered to hear Hong Kong residents’ thoughts on the government’s proposed ban on ivory – a bill 27-years in the making.

In response to an open call for written submissions and speakers, over 640 letters and other documents were delivered to LegCo. Of these, an overwhelming majority (94%) support the ban and do not support compensation for ivory traders they have had since 1989, when CITES effectively banned the international commercial trade in African elephant ivory by placing the species on Appendix I to sell down their stocks of pre-convention ivory.

Letters have been sent from Canada, Tanzania, Spain, Turkey, New Zealand and Japan in support of the ban. Whatever decision is made by Hong Kong’s LegCo will resonate globally, and the world has let local lawmakers know that the global community backs the ban.

“Please, the world community begs you, do not drag your feet. Take immediate, decisive steps to end ivory commerce.” – Martin Perlmutter, Save the Elephants

The call for the ban stretches across not just geographic divides. Chambers of Commerce of New Zealand, Canada and America, the consulates of France and America,  local businesses, including the Ocean Park Corporation, have rallied for the ban.

On the day itself, Hong Kong’s community carried through the momentum of the letter campaign, with people showing their support outside the Central Government Complex at Tamar site. Protesters included students from Kennedy School, King George V School, the Independent Schools Foundation Academy, the University of Hong Kong, and the City University of Hong Kong.

Inside the building, speakers from both sides of the debate addressed LegCo’s Panel on Environmental Affairs. Fifteen traders and their representatives squared off against twenty members of the Hong Kong community.  A ranger who was shot by elephant poachers in the Democratic Republic of Congo and a wildlife crime investigator from Zambia also spoke. Spirits were high, and impassioned speeches were delivered by both sides. 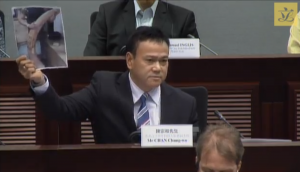 Chan Chung-wo, a local ivory trader, addressed the room angrily, thrusting photos of his stockpile into the air and shouting at councillors about imports from Germany. So Chi-keung, president of the Hong Kong and Kowloon Ivory Manufacturers Association, which represents the majority of Hong Kong’s traders, also spoke about legal imports of pre-Convention ivory into the city from Europe. However, neither provided any serious defence of their trade, attempting to shift blame to the Agriculture, Fisheries and Conservation Department (AFCD) for failing to prevent laundering and illegal activities.

The AFCD has struggled to enforce the trade in Hong Kong. In reality, the government lacks the capacity to regulate the trade and verify the legality of every piece of ivory in Hong Kong – a time-consuming and prohibitively expensive process. 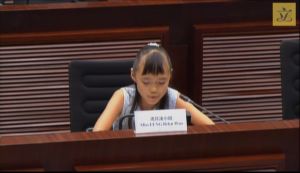 Belen Woo Fung, eleven-year-old student, addresses LegCo about sentience and compassion of elephants. Calls for support for the ivory ban.

Speaking on behalf of the pro-ban camp, Belén Woo Fung, an eleven-year-old student from King George V School, appeared before the panel, delivering a powerful speech that described the complex mental capacities of elephants, such as their inherent altruism, self-awareness, and experience of emotions, such as “joy, anger, fear and depression”. She called on LegCo members to support the ban legislation, and strongly opposed any compensation, stating “that would mean that we are rewarding the ivory traders and speculators for encouraging African poachers to illegally kill these beautiful creatures”.

Erik Mararv, a ranger serving at Garamba National Park in the Democratic Republic of Congo, began by expressing his gratitude for the opportunity to address LegCo and give voice to those “who are no longer with us”. He then detailed a short and bloody battle fought by himself and a small band of Congolese park rangers ambushed by poachers in Garamba last year.

“On behalf of the elephants themselves (long lived, highly intelligent and extremely social) I urge the Hong Kong government to impose the ivory ban, introduce increased penalties for all wildlife crime, and refuse to compensate ivory traders for their stocks.” – Dr Jane Goodall, UN Messenger of Peace

The Bills Committee, which will review the proposed bill, has since been formed and will convene its first meeting on July 7th 2017.

Sam is a researcher and geoscientist who has worked for a number of NGOs and academic institutions, focusing on environmental issues throughout Asia. He was employed by ADM Capital Foundation from 2016 to 2019, most recently as Environment Research Manager, overseeing projects on water security and wildlife crime. He obtained an MSc from the University of Exeter, UK, in 2013, with his research focusing on changing dynamics of the cryosphere and the impacts on societies in Asia and South America. 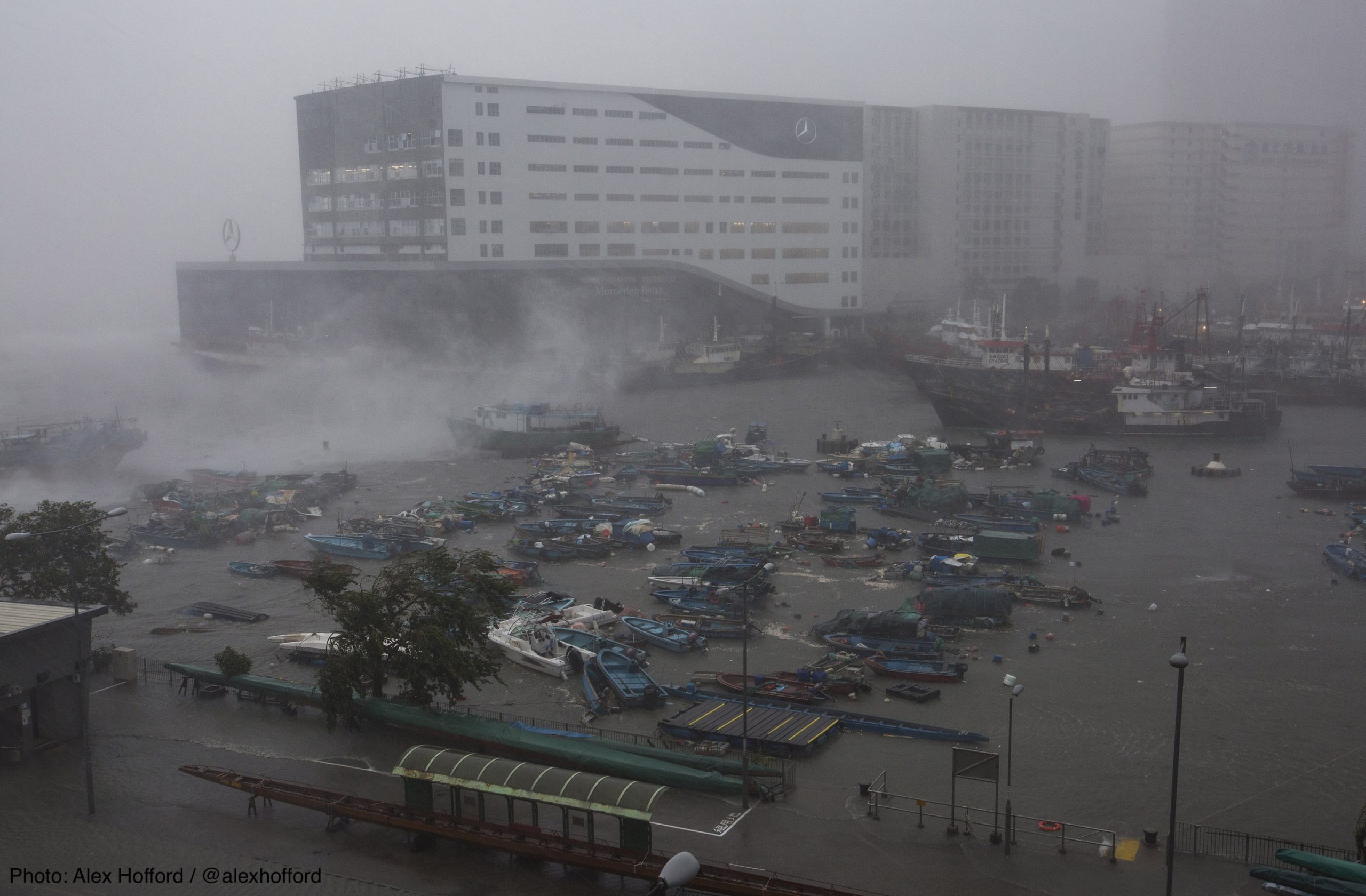 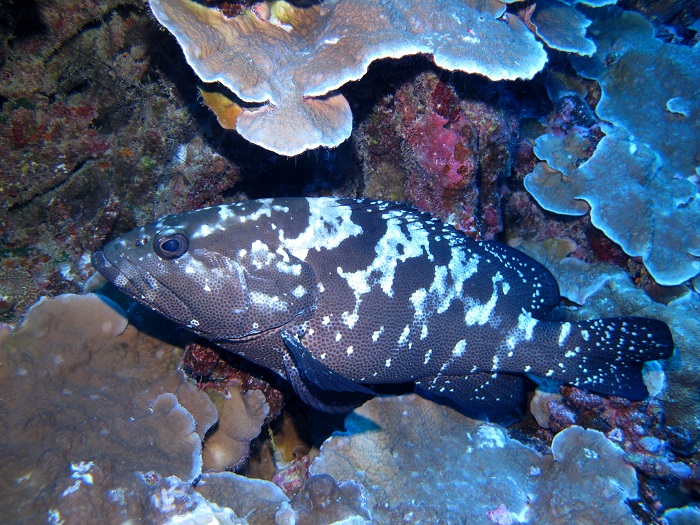