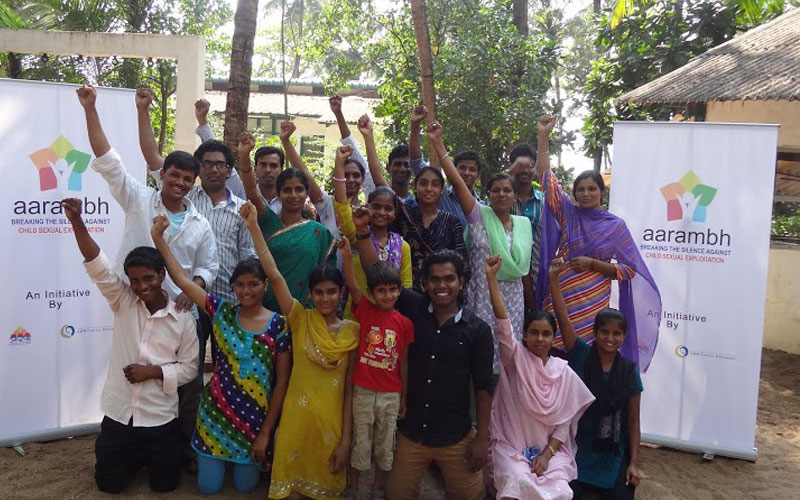 A 2012 report from the National Crime Records Bureau said that a child in India is raped every 76 minutes, while according to 2007 research commissioned by the Department of Women and Child Welfare, 53 percent of children report suffering sexual assault. If the number of unreported cases, harassment and online sexual abuse are included, the problem affects exponentially more children.

In 2012, the government introduced a new law on the topic, Prevention of Children against Sexual Offences Act (POCSO). Although this is a comprehensive set of regulations on paper, its implementation leaves much to be desired.

Additionally, there are not many organisations in India working on Child Sexual Abuse (CSA) in a focused manner. And even fewer work together. There also has been little documentation of best practices and guidelines. We felt the need for a common platform for learning and sharing on CSA built around POCSO and implementation of that law.

From this sentiment, Aarambh was born. Thus, when in November last year www.aarambhindia.org went live, it became India’s first online resource portal against CSA. For the first time, all available knowledge and resources on the issue were meticulously researched, consolidated and curated for targeted groups. The portal also functions as a central platform for organisations and individuals working on the issue where they can learn more about each other and their work. Hopefully this facilitates strategic collaborations and partnerships.

Aarambh emerged as an extension of ADM Capital Foundation’s ‘Break the Silence’ (BTS) campaign, which began as a collaboration with Philippines-based Stairway Foundation (SF) in 2011.  As part of that, in 2012, ADMCF country manager for India, Uma Subramanian, was trained in CSA Prevention by SF. Back in India, the new initiative found support, guidance and a local partner in the Mumbai-based Organisation Prerana who had been working on child protection and anti-human trafficking for the past 28 years.  Uma and Siddharth Pillai, who was hired later, took the experience and knowledge built while traveling India and speaking to organisations working with children, as a base to build Aarambh. They introduced or developed materials that were relevant to the Indian context.

The Safety Network, a group of more than 25 national and international NGOs, has been critical to Aarambh’s early success, providing material for the portal and more. www.aarambhindia.org is designed to foster a future where every individual has easy access to information that helps them protect and safeguard a child, where justice is delivered with minimum trauma to the victims. The idea is for society to move beyond the culture of ‘silence’ and taboos and begin to talk about bodies, sexuality and abuse openly and without fear.

A panel discussion followed on “What should be the next steps in taking the issue of CSA to its tipping point?” Experts in research, advocacy, law, community activism, medicine and the arts spoke on how we can act to stop CSA. Read our blog about the panel here.

www.aarambhindia.org marks the beginning of our journey. From that vantage, we see the road that lies ahead. And at the end of the road, we see a better future for India’s children.